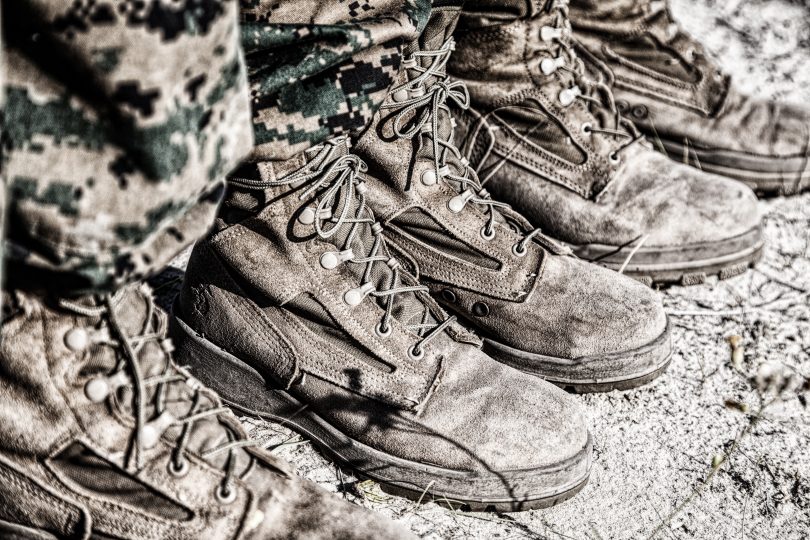 “….this writing healed me or has helped heal me and I don’t know if I’d be here if it wasn’t for Red Badge. And I mean that sincerely,”

By ANNIE CHARNLEY EVELAND of the Walla Walla Union-Bulletin Nov 27, 2019

For about a week this month, Seattle Opera’s post-show talks focused on themes from chamber opera “The Falling and the Rising.”

Discussions featured community members and organizations working to improve the lives and well-being of service members and veterans through the arts.

Participants included Walla Wallan Skip Nichols, who through his writing voiced his own experiences in combat and for its vital, healing credited the Red Badge Project, offered in Walla Walla to service members and veterans.

From Nov. 15-24, the opera followed a soldier’s odyssey, with music by Zach Redler and libretto by Jerre Dye. The story of service and sacrifice traces the inner journey of a comatose soldier, post roadside attack.

An ode to American service members that illuminates their often untold stories, the opera drew from interviews with veterans and active-duty soldiers.

Veterans who have experienced or are recovering from homelessness in the Puget Sound region comprise the chorus of “The Falling and the Rising” through a collaboration with Path With Art.

Five singers and an 11-piece orchestra brought the fully-staged, 90-minute production to life in the 200-plus seat Tagney Jones Hall at the Opera Center.

On Nov. 15, veterans spoke about their experiences in military service and their perspectives on the opera as part of a veterans panel.

The Red Badge Project founders Evan Bailey and veteran and actor Tom Skerritt on Nov. 22 talked about their experiences and vision for healing trauma through the arts. The project encourages soldiers to rediscover their personal voices using the fundamentals of storytelling.

And this is when Skip spoke. He told the audience he’s suffered 40 years from PTSD and traumas resulting from his combat experiences in Vietnam from 1967-68 as a Marine in service to this country.

My former colleague, a retired newspaper writer and editor of 40 years, said, “I had never written about my time in Vietnam and the VA said ‘we’ve got this new program coming and we think it might help you.’”

He worked for years to handle the demons, getting years of counseling and behavior therapy and still struggled. Then he attended the Red Badge program hosted at the Walla Walla Public Library.

At first intimidated by the packed room, he stayed and “learned to put the words down on paper as I felt them, not just newspaper facts. … I’d covered a lot of important sports and news events in my life but this writing healed me or has helped heal me and I don’t know if I’d be here if it wasn’t for Red Badge. And I mean that sincerely,” he told the opera audience in the intimate venue.

He wants others to know how important Red Badge is and share with other veterans. “There are too many veterans coming back now that are withdrawing and they need to be able to share their experiences in words and on paper and ultimately with you so that we can prevent more wounded veterans,” he said.

Reading from a piece he wrote about with Red Badge, Skip related haunting, gruesome images he relives daily.

He witnessed in slow motion another soldier being shot through the head, a small hole in one side, brain matter, bone and blood out the other, a “blinding flash of red,” a couple of twitches in the jungle foliage and stillness.

He described the victim’s head: “his head, the same head his mother had held to her breast, that head his father had stroked after he had taken his first steps, that head his girlfriend kissed so passionately when he left home for this unnecessary war.”

“… His head, the same head that had contained his brain and all the joy, fear, sadness and knowledge of this too short life, rested in a pool of warm red fluid mixed with shattered, splintered bone and gray matter.”

The story continues and the listener thinks the killed individual is a comrade until Skip describes the young soldier’s tire-tread sandal-clad feet. The listener doesn’t know who the shooter is.

Concluding, Skip read, “‘Nice kill,’ my lieutenant said, slapping me on the shoulder. ‘I’m sorry,’ I said to the young man. I say it every night to him as I dream of his forever death.”

Skip has written other demon-exorcising stories, including “Introduction to War,” published on Nov. 9, 2018, at ubne.ws/2OipHfr.

His character in that story, 20-year-old Bobby Erl Baker, tells about early days in his tour in Vietnam.

The results of his service, in addition to unceasing nightmares, is an aggressive cancer that required three surgeries, courtesy of being sprayed in the field by Agent Orange.

The VA surgeon told Baker he couldn’t get all the cancer. Baker’s “time was limited. Maybe six months, maybe two years, said the doctor. ‘We just can’t tell. But we can keep you pain free with the right medicines.’”

Baker swore 50 years before that he wouldn’t use marijuana after being in Vietnam, but since the “right” medicines caused problems of their own he changed his mind.

“The legal marijuana (Baker) bought in Washington, where he now lived, brought him relief from the intensely painful, deadly disease,” Skip wrote in the story.

“He found it had an added benefit. The marijuana gave him a measure of peace from the torture of PTSD he suffered because of horrific memories of war. The nightmares disappeared. The flashbacks disappeared. The anger he felt waned. The war never ended in Baker’s mind, but at least now he felt he had made the right decision.”

Theredbadgeproject.com states, “For Wounded Warriors struggling to heal the invisible wounds of PTSD, anxiety and depression, believing in the value of their story and finding the means to communicate it to family, friends and community is a struggle of heroic proportions.

“Our stories inform the audacity of the imagination and the understanding of ourselves as unique individuals.”

The program is available also at vet centers in Spokane, Seattle, Federal Way, Bellingham and Everett. 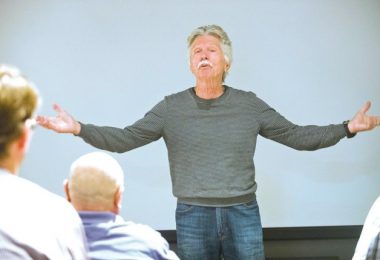 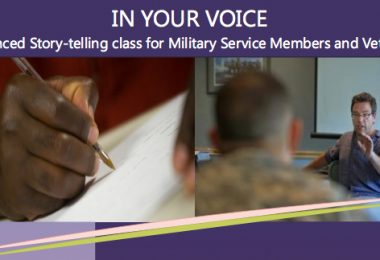